If Made Using Renewable Power, Hydrogen Could Provide a
Clean and Carbon-Neutral Source of Energy. Europe is Leading the Way.


GREEN HYDROGEN. Hydrogen is an appealing fuel. A kilogram of hydrogen has about three times as much energy as a comparable amount of diesel or gasoline. If it can be made cleanly and cheaply, it could be the key to cleaning up an array of tricky vital sectors.

Today, most manufactured hydrogen is made by combining natural gas with steam at high temperatures. It's an energyintensive process that emits considerable amounts of carbon dioxide, the main greenhouse gas driving climate change. But a small and growing percentage is made by splitting water into its constituent elements by zapping it with electricity, a process known as electrolysis. This also takes a lot of energy, but if the electricity comes from a renewable source like wind or solar power, it produces minimal harmful emissions.

This so-called "green" hydrogen is today about three times more expensive to produce than hydrogen derived from natural gas (which is mostly methane, whose molecules are composed of one carbon atom bonded to four hydrogen atoms). But that is half of what it cost 10 years ago. And as the cost of wind and solar power continues to drop, and economies of scale around green hydrogen production kick in, it could get a lot cheaper. If that happens, green hydrogen has the potential to become a core fuel for a decarbonized future. In parallel, as carbon capture techniques improve, hydrogen can be extracted from natural gas without releasing as much carbon dioxide into the atmosphere.

Hydrogen is valuable in part because of its versatility. It can be burned as a substitute for fossil fuels such as coal, petroleum, and natural gas. These fuels all produce carbon dioxide when combusted, whereas burning pure hydrogen in a turbine produces just water vapor. It does, however, also catalyze the production of harmful nitrogen oxides because of the high temperatures involved. Another way to use hydrogen is in fuel cells, which combine hydrogen with oxygen to create water and electricity — the reverse of electrolysis — without producing nitrogen oxides. 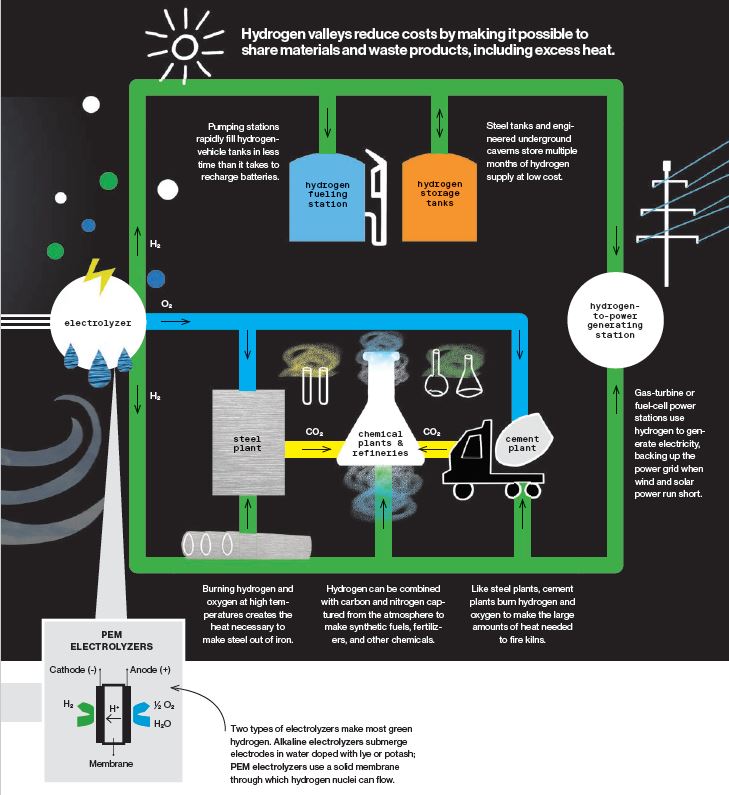 Hydrogen can power vehicles including cars, buses, trains, and aircraft, either through fuel cells or by burning it directly. Burning hydrogen can also deliver zerocarbon heat for use in steel mills, cement plants, and other industries. And green hydrogen can replace the hydrogen already used as a feedstock in everything from refineries to fertilizer plants, reducing their carbon dioxide emissions. Some industrial sites, such as steel mills and chemical plants, can also use the oxygen produced as a by-product.

Regardless of how it is manufactured, safely and affordably storing and transporting hydrogen remains difficult, especially for some promising applications like aviation. (Remember the Hindenburg?) That's why another option is to combine hydrogen with carbon — which can be captured from the atmosphere in a process called air capture or from smokestacks — to produce liquid synthetic hydrocarbon fuels that are easier to handle than hydrogen. These liquid fuels can be a cleaner, like-for-like replacement for gasoline or diesel.

Hydrogen can also be used to store energy from renewable-power plants, which can then be converted back into electricity and fed into the grid if wind dies down, clouds come in, or demand rises. With so many possible uses, the International Energy Agency (IEA) predicts that by 2050, hydrogen could provide over 10% of global energy needs, producing more than 11 million gigawatt-hours of energy per year. That will require more than $4 trillion in infrastructure for producing, storing, and transporting hydrogen.

Europe alone is targeting 40 gigawatts of electrolysis capacity by 2030. (That would go about 2% of the way to the IEA's 2050 prediction.) "There's a tsunami wave of opportunity since the beginning of [2020]. It is unbelievable the number of big and realistic projects coming," says Christoph Noeres, who heads the green hydrogen business for Uhde Chlorine Engineers, a subsidiary of German conglomerate ThyssenKrupp.

HOW GREEN WAS MY VALLEY

Hydrogen valleys — regional projects that situate electrolysis plants where they can serve multiple industrial purposes — are forming across Europe. Near Hamburg in northern Germany, ThyssenKrupp is part of an €89 million ($107 million) green hydrogen consortium supported by a €30 million grant from the German government. The planned project includes a refinery, a cement plant, power generators, and an offshore wind farm.

Initially its green hydrogen will replace some gray hydrogen — as natural-gasderived hydrogen is sometimes called — used at the refinery. The German group then plans to react hydrogen with carbon dioxide captured from the cement plant to produce both methanol, a chemical feedstock, and synthetic jet fuel.

Some 240 kilometers (150 miles) to the southwest, another green hydrogen consortium will repurpose decommissioned gas pipelines to carry hydrogen gas. The consortium plans to build a 100-megawatt electrolyzer. From there, it hopes to pipe hydrogen through a 130-kilometer network in the industrial Ruhr region.v If this pipeline repurposing works, electrolyzers connected to old pipes could ultimately serve green hydrogen to nearly all Germany's major industries. That will ease pressure on Germany's congested power grid and also provide a ready supply of backup energy for dark, windless periods.

Other large projects are starting in the Netherlands, Italy, Spain, France, Britain, Canada, Australia, Japan, and China. Initially, the hydrogen these projects produce will be expensive. However, the consultancy McKinsey estimates that by 2030 green hydrogen will be as cheap as gray hydrogen, thanks to cheaper electrolysis and renewable electricity generation as well as to rising carbon costs.

If hydrogen is to live up to its potential, public policy will be crucial. For starters, regulators or legislators will need to institute policies to enable existing natural-gas pipelines to carry hydrogen too — known as "blending" — and mandate cuts in carbon emissions to generate demand for hydrogen.

Some of this is already happening. Germany made an important change late last year, freeing green hydrogen producers from paying certain surcharges on electricity. This was, in effect, a recognition by the government that green hydrogen is an extension of renewable wind and solar power. Other regulations under discussion in Germany, and across Europe, would require carbon reductions at refineries and steel mills, and in other heavy industries, under the European Commission's Renewable Energy Directive.

Jack Brouwer, associate director of the Advanced Power and Energy program at the University of California, Irvine, says similar policies are needed to get green hydrogen going in the US, but discussions have barely begun.

Whereas European governments mandate that natural-gas pipelines accept green hydrogen — in amounts as high as 12% by volume in the Netherlands — US gas operators often oppose blending.

Blocking hydrogen blending is a serious obstacle, according to Brouwer. California already has a rule mandating that a third of the hydrogen pumped at filling stations for fuel-cell vehicles come from renewable sources. But currently it's tough to get green hydrogen. Brouwer says that if producers could use existing natural-gas pipelines as a distribution network, they could profitably build more electrolyzers in remote areas that are particularly windy or sunny.

There are also still plenty of technical hurdles to be overcome. The scale of wind and solar power needed to run a global network of electrolysis plants is enormous. makes the case that a sustainable future is simply impossible without relying heavily on hydrogen. He just might be right.