In the News Archives

During Celebrate UCI on April 18th, the first Hydrogen Fuel Cell Bus on a UC campus was unveiled. This addition to the Anteater Fleet, will join a group of 29 biodiesel buses that reached a ridership of over two million passenger miles in fiscal year 2014, and is expected to log nearly four thousand miles per month on its assigned route. The National Fuel Cell Research Center (NFCRC) in partnership with Anteater Express, Ballard Power Systems, El Dorado, and BAE Systems, was awarded funds by the California Energy Commission under its Alternative and Renewable Fuel and Vehicle Technology Program to build and demonstrate the addition of a FCEB to the UC Irvine fleet. CALSTART, a member-supported organization dedicated to advancing clean transportation alternatives, was the project manager.

The 40 foot FCEB which complies with the Buy American Act that requires more than 60% domestically sourced content, was assembled at the El Dorado National bus manufacturing facility in Riverside, California, with the aesthetics of the bus custom designed by UCI's Anteater Express group. BAE Systems served as the system integrator and hybrid powertrain developer. Ballard provided the FCvelocity-HD6 150 kW power plant. The FCEB has 200 kW of electrical energy storage and 50 kg of hydrogen storage at 350bar, providing the bus with a range of 260 miles under a typical urban transit cycle, while transporting up to 37 seated and 19 standing passengers.

At the start of the new school year, the NFCRC will collect and use data on the FCEB's operation to be used in modeling tools developed for planning and assessing operational and environmental impacts of zero emission technology deployed in transit fleets. Additionally, the NFCRC will collect data from the refueling of the FCEB at the UCI hydrogen station to determine the impact on this station that also serves light duty passenger vehicles. 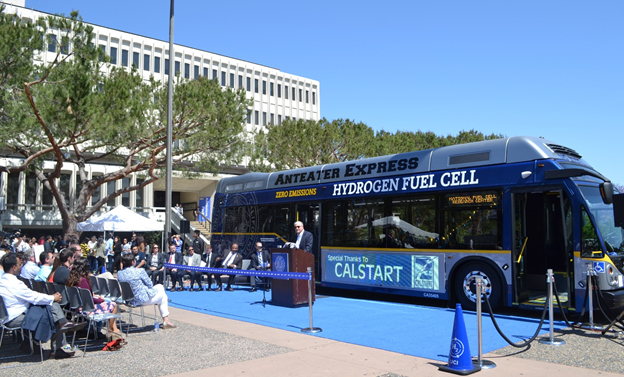