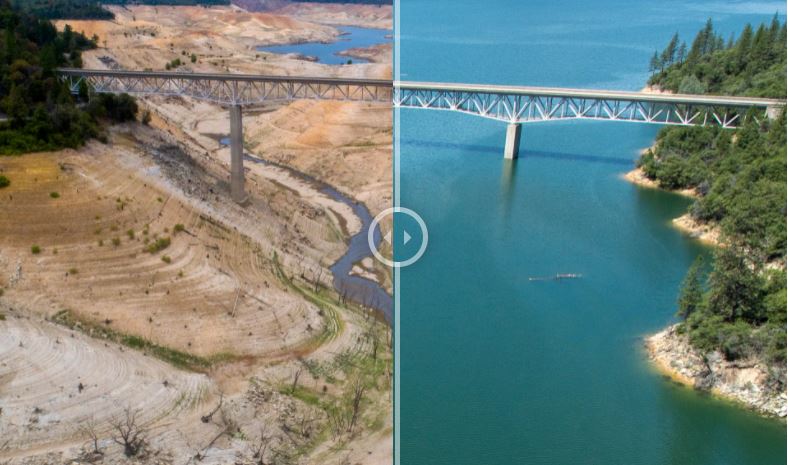 A view of Lake Oroville at 96 percent capacity on May 11, 2016 (right),
and in drought conditions on July 26, 2021 (left).
Move slider to reveal photos.
(Kelly M. Grow/ California Department of Water Resources)


I grew up in typically dry, inland southern California, so droughts are not entirely unexpected for me, my neighbors, or my colleagues. Since I was born in 1987, the state has endured four long droughts: the 1987-1992 drought, the 2007-2009 drought that contributed to one of the state's worst wildfire seasons, the 2011-2017 drought that is California's longest drought on record, and the current drought that started in 2020 and continues to worsen. I grew up hearing warnings about water shortages and high temperatures.

While experiencing a few years of drought is not entirely new to residents of the arid Southwest, what is new is the intensity and duration of current droughts, because of climate change caused by our dependence on fossil fuels to meet our energy needs. There is also evidence that what is considered a typical climate in California is unusually wet compared with long-term historical trends for the region. In the future, climate change is expected to cause droughts to be longer and more intense in terms of precipitation shortage. That will affect California's water supply and other systems that depend on it, namely hydroelectric generation resources.

Falling water levels. California is already experiencing the effects of climate change-induced droughts on hydroelectric resources. Just last week, the Edward Hyatt Power Plant at Lake Oroville had to cease hydroelectric generation for the first time since its construction in 1967. Water levels at Lake Powell, a reservoir on the Colorado River upstream of Lake Mead that supplies Hoover Dam and its export of electricity to California, also fell to their lowest level since the 1930s. During the 2011-2017 California drought, utilities compensated for the loss of hydroelectric generation by increasing their reliance on natural gas power plants to prevent blackouts, causing a 33 percent increase in annual carbon dioxide emissions from 2012 to 2014. 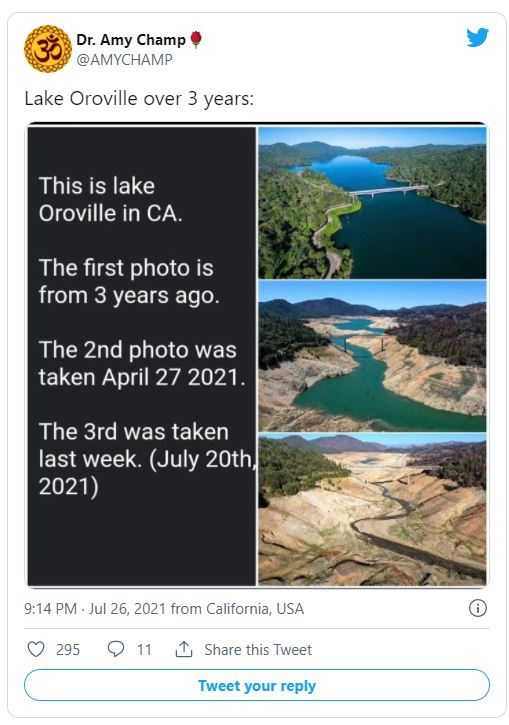 Drought impacts on hydropower affect the electricity system in both the near and long terms. In the near term, a continued lack of water availability through this summer and potentially through subsequent years will again mean increased reliance on natural gas. While California's generation mix has started to incorporate more renewables and energy storage, these resources are not yet sizeable enough to compensate for a significant reduction in hydroelectricity generation, which typically makes up 15 to 20 percent of the state's electricity supply in non-drought years.

As we are seeing with Lake Powell, hydropower generation does not simply decrease proportionally to decreased water availability: If water reservoir levels drop below the height of the intake levels for hydroelectric turbines, the facility must cease electricity production entirely. When reduced water availability is combined with record-breaking temperatures and wildfires, such as the Bootleg Fire in Oregon that threatened transmission lines carrying power to California, the loss of hydropower can result in high electricity prices and potential rolling blackouts.

Hydropower's key role. In the long term, California will need to account for the effects of climate change in state plans to develop a zero-carbon electricity system. Hydroelectricity can potentially fulfill an important role in meeting the state's goals in a cost-efficient and materially efficient manner. This is because hydropower belongs to a class of resources that do not produce greenhouse gas emissions during their operation and can provide electricity generation to ensure electric loads are met when variable wind and solar generation are low and other energy storage systems are depleted.

Research on how best to develop a zero-carbon electricity system generally shows that having controllable resources—those that are available on demand, not just when the wind is blowing or the sun is shining—as part of the mix can enable grids to meet a given decarbonization goal at lower cost (and lower material throughput) than trying to do so with wind, solar, and energy storage only. There are ongoing debates about what types of controllable zero-carbon resources should or should not be included in a future electricity system, particularly regarding nuclear and biomass. Hydroelectricity, however, is often present in designs of future systems, due to its demonstrated ability to operate flexibly and its already significant existing capacity in the United States and globally. The US Energy Department's HydroWIRES initiative, an ongoing research program aimed at better understanding the capabilities of hydroelectric resources to support future electric grids, recognizes the value of hydroelectricity throughout the United States. While using hydroelectricity to support future electricity systems does not come without issues that must be addressed, such as how to manage flows to protect endangered fish, hydroelectricity has the potential to play a critical role in zero-carbon electricity systems.

Altered patterns of water availability. The ability of hydroelectric resources to provide the short-term benefits of avoiding additional natural gas use (and its associated emissions), as well as the long-term benefits of enabling the development of reliable and affordable zero-carbon electricity systems, depends on the availability of water both in total and during times when the electric grid most needs it. Climate change is expected to alter the patterns of water availability for hydropower by intensifying and lengthening storms during wet periods and droughts during dry periods. Even if the total amount of water provided to reservoirs does not change, a change in the timing of precipitation affects the ability of hydroelectric power plants to act as backup systems for variable renewable energy resources.

For example, in California, precipitation has historically occurred in the fall and winter months as snow, building a large snowpack in the state's high-elevation mountains. During the spring, the snowpack melts, sending water to reservoirs for storage. This ensures that water is available to meet high summer demands for both water and electricity. In a warming climate, however, precipitation in the fall and winter is expected to intensify and fall as rain instead of snow. Instead of rebuilding mountain snowpack, this rain will increase reservoir inflows. A sudden increase in runoff can cause reservoirs to fill to capacity, forcing operators to release any additional inflow to avoid structural failure, which means that not all the precipitation will be stored.

During the summer, drought events are expected to last longer than past events, and the water stored in California's reservoirs may not be sufficient to meet the summer's highest electric demands. If California plans its zero-carbon electricity system based on historical hydroelectricity availability, but gets less availability because of climate change, the state may either not meet its zero-carbon electricity goals or run the risk of blackouts.

Accounting for climate change. Moving forward, there are two classes of actions that California can take to reduce the impacts of climate change on hydroelectric resources. The first is to account for the effects of climate change on water availability in the operational practices of hydroelectric reservoirs, by developing updated water release schedules that expect future, more variable inflows rather than historical inflow patterns. The specifics of what such changes will look like will vary from reservoir to reservoir, since each reservoir is subject to different inflow patterns and operated under different constraints and priorities outside of hydroelectric generation.

The second set of actions is to account for the effects of climate change on the availability of hydroelectric generation as part of the resource mix that will supply the future, zero-carbon electric grid. Including these impacts in the state's capacity expansion modeling, which informs planning decisions, will give planners a better understanding of the extent to which other resources (such as geothermal or energy storage, for example) will need to be further expanded to compensate for changes in hydroelectric resource availability in a warmer climate.