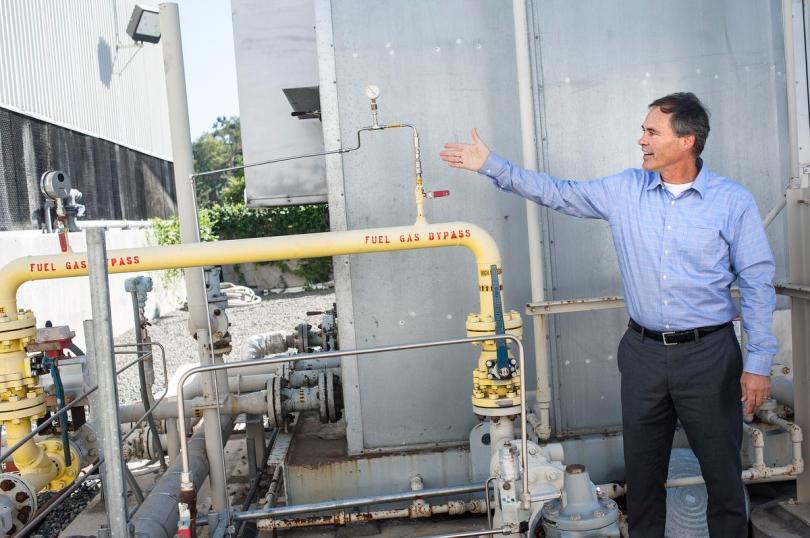 Right here at UC Irvine, we're doing a little science experiment that could make a big difference for countries around the globe as they look for ways to replace fossil fuels and stop climate change. This experiment is focused on how to store extra solar energy.

Just as in all of California, on sunny days our campus solar panels make more electricity than we can use. But we need that extra electricity at night or during rainy periods when the sun isn't shining. What's the problem, you say – can't you just charge up some batteries during those sunny days and draw from them when it's dark or rainy? That might be possible for one campus, but statewide, and certainly globally, traditional batteries can never be the main solution for renewable energy storage.

That's why I'm concerned when I hear claims that the way to a zero-carbon future is to "electrify everything" and support the state's energy needs with only sunshine, wind and batteries. Far too many people have been misled into believing that this is the entire solution – and many of our state agencies and legislators have bought in. This could take our state down a risky path of relying only on electric power without alternate forms of clean energy, and with an electric grid that can never become fully clean.

Solar, wind and batteries can only partly solve the world's (or even just California's) climate change and air quality problems. Here's why:

First, batteries don't hold a charge for long, as you know from trying to start your car after it has sat without running for any length of time. Batteries are good for short-term storage, but they can't hold energy from a sunny September for use during a rainy January.

Second, batteries simply can't hold enough energy. Even if all 35 million motor vehicles in California were replaced with electric vehicles and we used those EV batteries to store energy for the grid, they could only hold about 4% of the energy that we would need to store over the course of one year in a 100% renewable grid.

Third, lithium-ion batteries are the best batteries in the world, used for most of the grid storage in California and most consumer products, but, there is not enough lithium available to meet the world's renewable energy storage needs – we'd need almost 60 times as much lithium as that which exists on Earth.

Also, battery costs are likely to increase as we reach the limits of lithium and other materials used to make them. Finally, at the end of their useful life, batteries create waste that is difficult to recycle.

But if batteries are only part of the energy storage solution, what can we do?

Fortunately we are testing a solution here at UCI, and yes, and it's an energy storage solution that is already being tested or used at scale in Germany, Canada and the Netherlands. The solution is to convert electricity to hydrogen gas, which can easily be stored in existing infrastructure.

By running renewable electricity through an electrolyzer you can separate water molecules into hydrogen and oxygen. The oxygen can either go into the atmosphere or be captured for medical or other uses. The hydrogen can be stored, and then – here's where it gets interesting – converted in a power plant to make carbon-free electricity. In other words, using the simple technique of electrolysis allows renewable energy to be stored in gaseous form, and the carbon-free hydrogen gas can then fuel the same type of low-emitting power plants in use today, or zero-emission fuel cell plants in the future.

We've been evaluating this concept here at UCI for almost a decade, and testing it on our campus for more than two years. What we've found has made me confident that ending climate change and improving air quality is possible with this renewable hydrogen technology.

We've found, for one thing, that we can install and use at least 10 times more solar energy on our campus than we currently have installed (more than 4 megawatts). And we've calculated that existing gas pipeline infrastructure can hold an immense amount of energy (in the form of hydrogen) for use whenever there is an imbalance between renewable power supply and user demand. Hydrogen also enables the transmission and distribution of energy over long distances in a simpler and less costly way than the transmission of electricity.

So why is this solution not getting more attention? In part, because of those who wish to see the gas pipeline system go away. Their argument is that, so long as California has pipelines, it necessarily follows that those pipelines will carry fossil fuel. It's a rather short-sighted argument. But it's one that has been echoed even by state agency commissioners.

I am sure that California would be ill-advised to decommission existing gas infrastructure that will ultimately be indispensable for storing the renewable, non-fossil energy we need. We already have a completely zero emissions 13,000 gigawatt-hour battery, and it's right underneath our feet.

Professor Jack Brouwer is the Director of the National Fuel Cell Research Center at UC Irvine.