California Is Trying To Jump-Start the Hydrogen Economy

The fuel could play an important role in fighting climate change, but it has been slow to gain traction because of high costs. 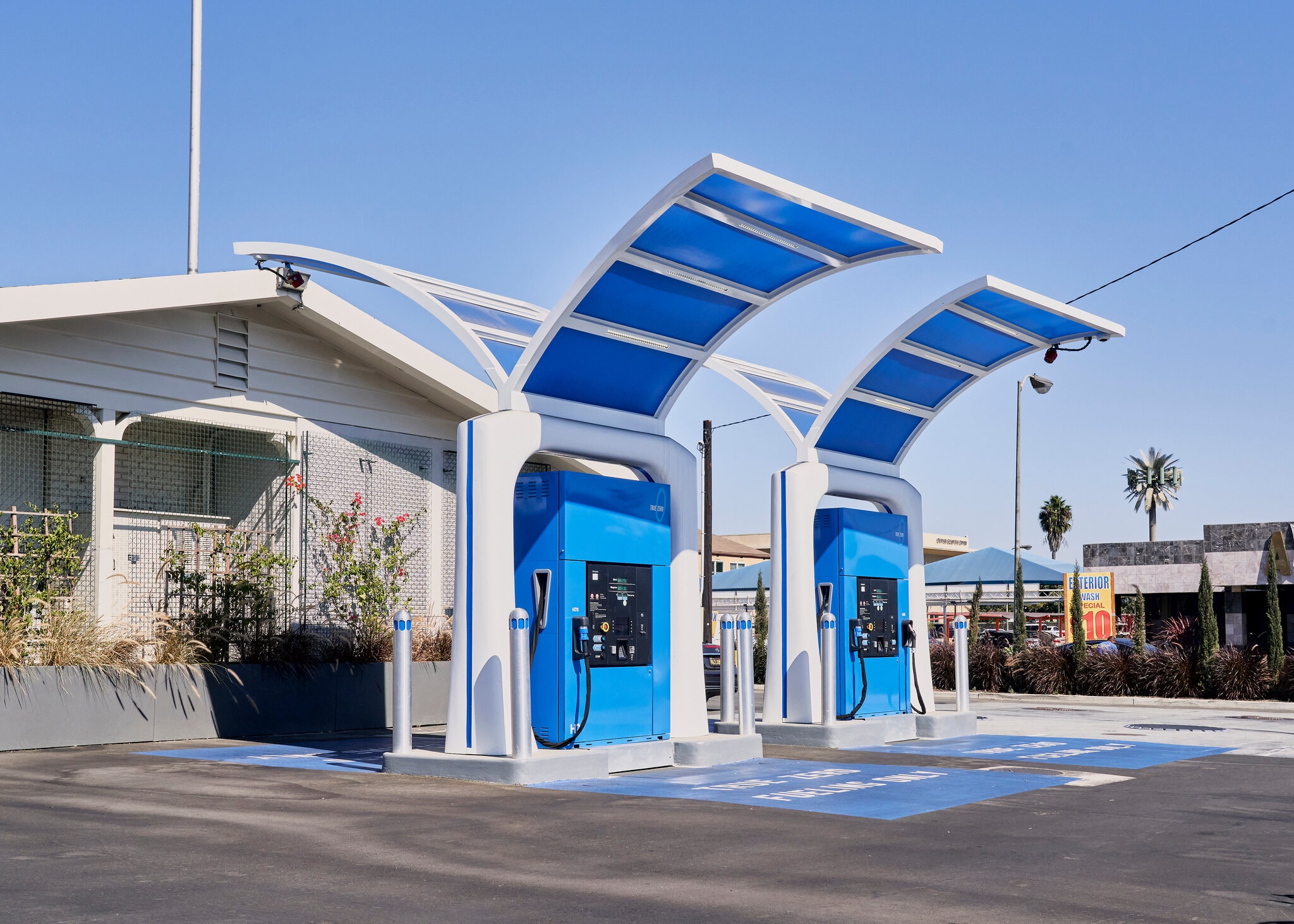 California has 40 hydrogen pumps and dozens more under construction. These from True Zero are at an Arco gas station in Fountain Valley. Credit: Philip Cheung for The New York Times

IRVINE, Calif. — Since President George W. Bush fueled a minivan with hydrogen 15 years ago, the promise of cars and trucks powered by the fuel has come up mostly empty.

That hydrogen pump, in Washington, closed long ago. But in California, the beginnings of a hydrogen economy may finally be dawning after many fits and starts.

Dozens of hydrogen buses are lumbering down city streets, while more and larger fueling stations are appearing from San Diego to San Francisco, financed by the state and federal governments. With the costs of producing and shipping hydrogen coming down, California is setting ambitious goals to phase out vehicles that run on fossil fuels in favor of batteries and hydrogen. Large auto and energy companies like Toyota Motor and Royal Dutch Shell have committed to supplying more cars and fueling stations.

"In past cycles, there was always something missing," said Matthew Blieske, Shell's global hydrogen product manager. "There was a policy missing, or the technology wasn't quite ready, or people were not so serious about decarbonization. We don't see those barriers anymore."

Some energy executives said they expected investment in hydrogen to accelerate under President-elect Joseph R. Biden Jr., who made climate change a big part of his campaign and proposed a $2 trillion plan to tackle the problem.

A recent McKinsey & Company study estimated that the hydrogen economy could generate $140 billion in annual revenue by 2030 and support 700,000 jobs. The study projected that hydrogen could meet 14 percent of total American energy demand by 2050.

The use of hydrogen, the lightest and most abundant substance in the universe, is still in its infancy, and California is determined to be its cradle in the United States, with $20 million in annual funding from the California Energy Commission through vehicle license fees. California will have spent about $230 million on hydrogen projects by the end of 2023. The state now has roughly 40 fueling stations, with dozens more under construction. While those numbers are tiny compared with the 10,000 gasoline stations across the state, officials have high hopes.

With about 7,500 hydrogen vehicles on the road, an aggressive state program of incentives and subsidies from cap-and-trade dollars envisions 50,000 hydrogen light-duty vehicles by middecade and a network of 1,000 hydrogen stations by 2030. The infrastructure required for producing, transporting and dispensing the gas alone will cost about $10 billion, according to California hydrogen researchers, who expect both private and government investment.

Other states are much further behind. A vast majority of the country's hydrogen fueling stations and vehicles are in California. 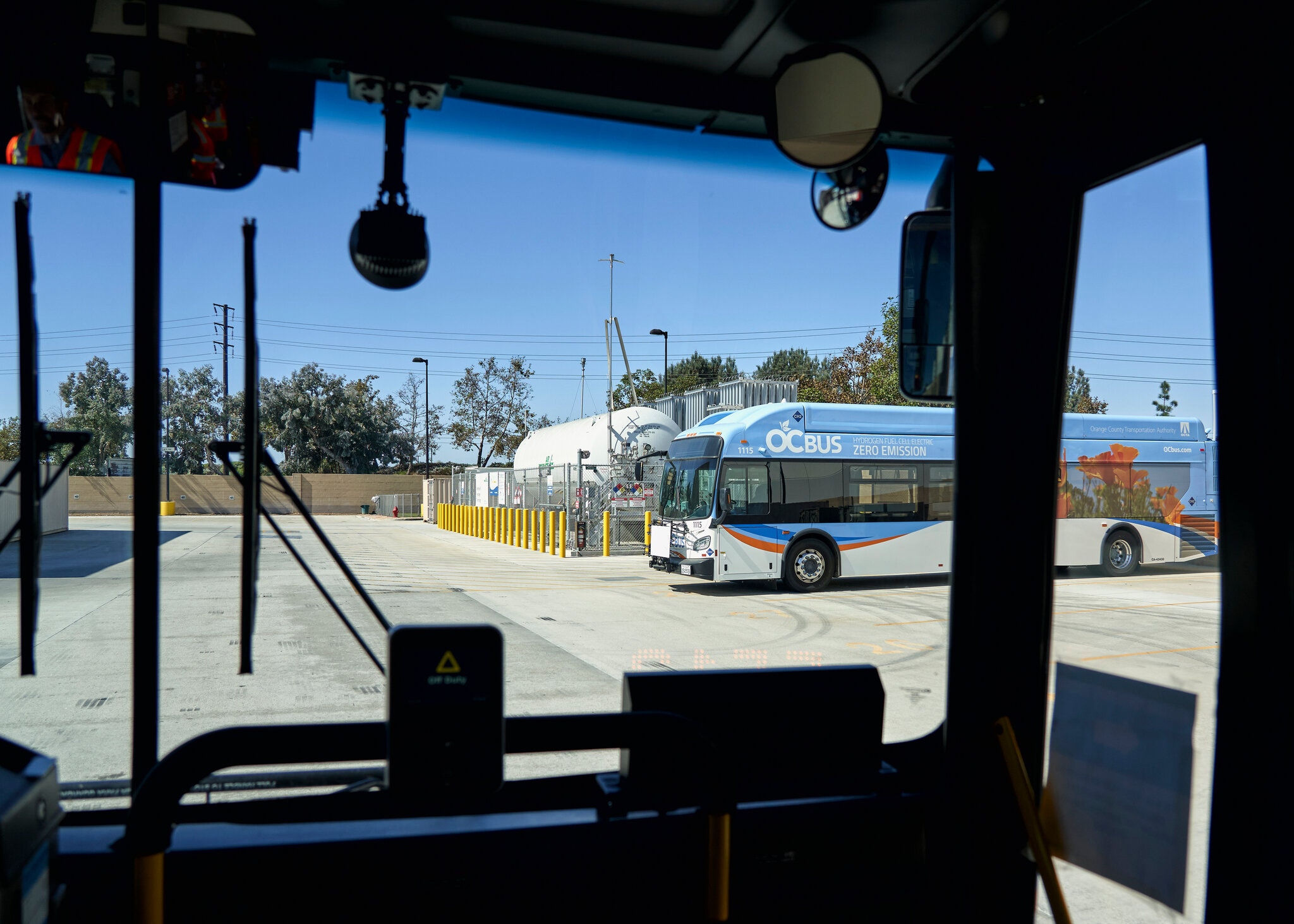 The Orange County Transportation Authority and other transit systems have bought hydrogen buses with the help of clean energy grants. Credit: Philip Cheung for The New York Times

Hydrogen-powered vehicles are similar to electric cars. But unlike electric cars, which have large batteries, these cars have hydrogen tanks and fuel cells that turn the gas into electricity. The cars refuel and accelerate quickly, and they can go for several hundred miles on a full tank. They emit only water vapor, which makes them appealing to California cities that are trying to reduce pollution and greenhouse gas emissions.

"Almost any objective analysis for getting to zero emissions includes hydrogen," said Jack Brouwer, director of the National Fuel Cell Research Center at the University of California, Irvine.

Mr. Brouwer does not think hydrogen will become the dominant energy source soon, but he argues that it has great potential as a fuel for vehicles, power plants and appliances. Hydrogen, he said, will complement the use of lithium-ion batteries, solar panels, wind turbines and natural gas.

U.C. Irvine has experimented with hydrogen for years and formed partnerships with local governments and major corporations to popularize its use in Southern California.

Just over a decade ago, Tim Brown worked on gasoline systems at General Motors. He went back to school in 2004, studied hydrogen with Mr. Brouwer and "became a believer."

Five years after earning his doctorate in 2008, he founded First Element Fuel, which operates 21 hydrogen fueling stations, including a four-pump unit at an Arco gas station in Fountain Valley, about a 10-minute drive from U.C. Irvine. The company plans to build up to 80 stations across the state, under the brand name True Zero.

One recent afternoon, Karen Harelson pulled up to the Arco station in her Toyota Mirai, a hydrogen-powered sedan that she bought two years ago. "I personally don't think they should make another car without it," said Ms. Harelson, 66, a retired professor at Golden West College. "It's the best car I've ever had. The problem is, there's just not enough stations around." 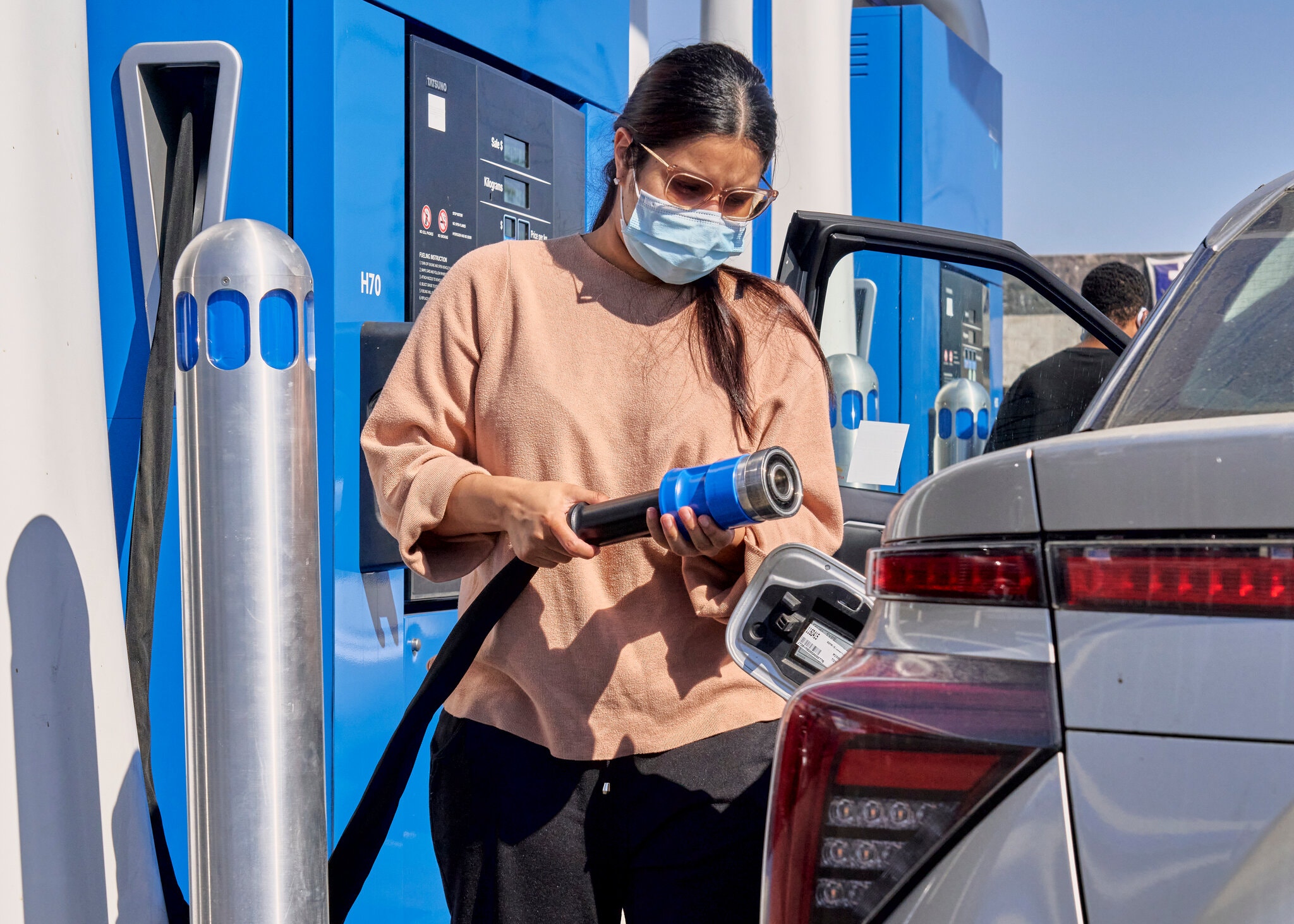 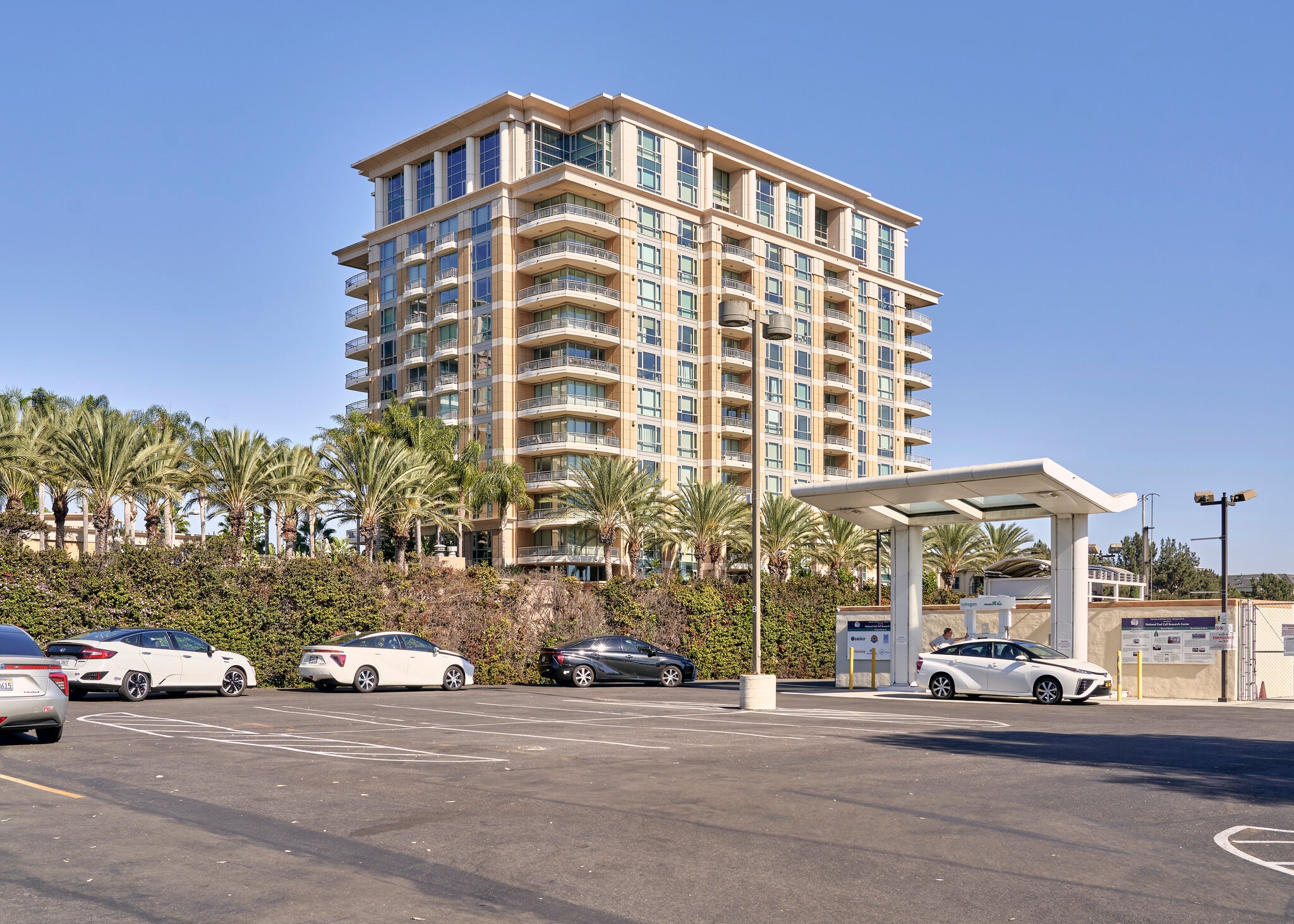 Hydrogen-powered cars waiting for fuel at a hydrogen station at the University of California, Irvine. Credit: Philip Cheung for The New York Times

That's a common complaint. Because of the paucity of hydrogen pumps, car owners often wait in line. But unlike battery-powered electric cars, which can require 45 minutes to several hours to fully charge, hydrogen cars, like gasoline ones, fill up in less than 10 minutes and are good for 300 miles or more on a full tank.

Some proponents of hydrogen think its biggest use will be in larger vehicles. Among them is SunLine Transit, which serves Palm Springs and other cities in Riverside County.

The transit system has 17 hydrogen buses and is planning to add 10 in the next year. SunLine used more than $27 million in grants over the last 10 years to buy the vehicles and equipment to produce hydrogen, which it makes with the help of electricity from the grid and solar panels. The transit agency already sells compressed natural gas, which fuels most of its buses, to commercial and government agencies, and it plans to sell hydrogen, too.

Lauren Skiver, the chief executive and general manager of SunLine, said that she had invited other transit agencies and utilities to see just how far hydrogen had come but that she had often met with disbelief and ambivalence.

"We try to meet with them all the time: 'Look what we're doing on hydrogen,'" Ms. Skiver said. "They're not interested at all."

There is good reason for skepticism.

While there have been many technical advances, hydrogen is still expensive to make and transport. Fuel-cell vehicles also cost more than comparable electric cars. A Toyota Mirai sells for nearly $60,000 before subsidies. A Tesla Model 3 starts at about $38,000 before subsidies. Then there is the chicken-or-egg issue of trying to get people to buy hydrogen vehicles before there is a comprehensive fueling infrastructure. 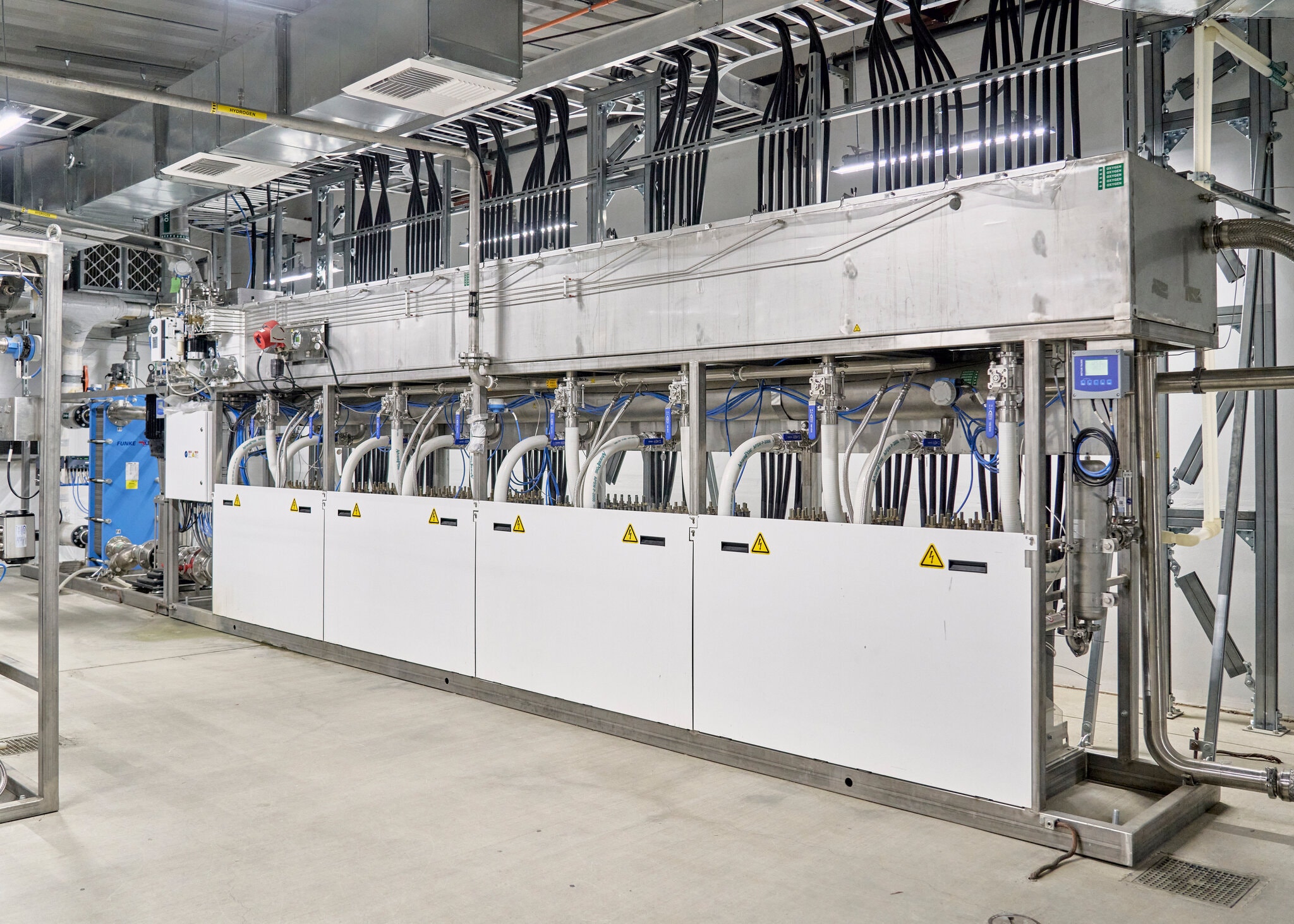 SunLine Transit has invested in equipment that can split water into oxygen and hydrogen atoms. Credit: Philip Cheung for The New York Times

Critics, including Tesla's chief executive, Elon Musk, point out that hydrogen's promoters have long failed to deliver on their promises.

In his 2003 State of the Union address, President Bush said that "the first car driven by a child born today could be powered by hydrogen and pollution free." Those hopes were propelled mainly by the rising cost of oil and natural gas at the time. After a boom in hydraulic fracturing helped drive down energy prices, hydrogen took a back seat.

Still, hydrogen's potential continues to entice governments, researchers and corporations. Countries like France, Germany, China, Australia, South Korea and Japan have invested tens of billions of dollars in hydrogen, in part to reduce their reliance on fossil fuels and to address climate change.

Toyota, Hyundai, Daimler and several other automakers are betting on hydrogen cars and trucks. And Shell is building hydrogen stations in Europe and California.

The best use for hydrogen, some experts argue, is to power trucks, buses and airplanes. That's because the fuel packs energy in a smaller and lighter package than the current generation of batteries, leaving more room for cargo and passengers. Hyundai is prepared to introduce the first mass-produced heavy-duty fuel-cell truck in a few months. Toyota, which has been testing fuel-cell trucks at the Port of Los Angeles since 2017, recently said it would develop heavy-duty fuel-cell trucks for North America.

Hydrogen poses a long-term threat to oil companies because it could compete with diesel and jet fuel. That is also why many large European oil and gas companies, like Shell and BP, have sought to make hydrogen part of a transition to a lower-carbon future.

Most hydrogen today is extracted from natural gas in a process that requires a lot of energy and emits carbon dioxide. But combined with carbon capture and sequestration, the process can be environmentally viable.

Over time, government officials and researchers expect most hydrogen to be made without emissions. The cleanest hydrogen production comes from using renewable electricity to split water molecules into hydrogen and oxygen. The equipment to do that is expensive, but costs have been falling in recent years, especially as wind and solar energy become the cheapest ways to generate electricity. 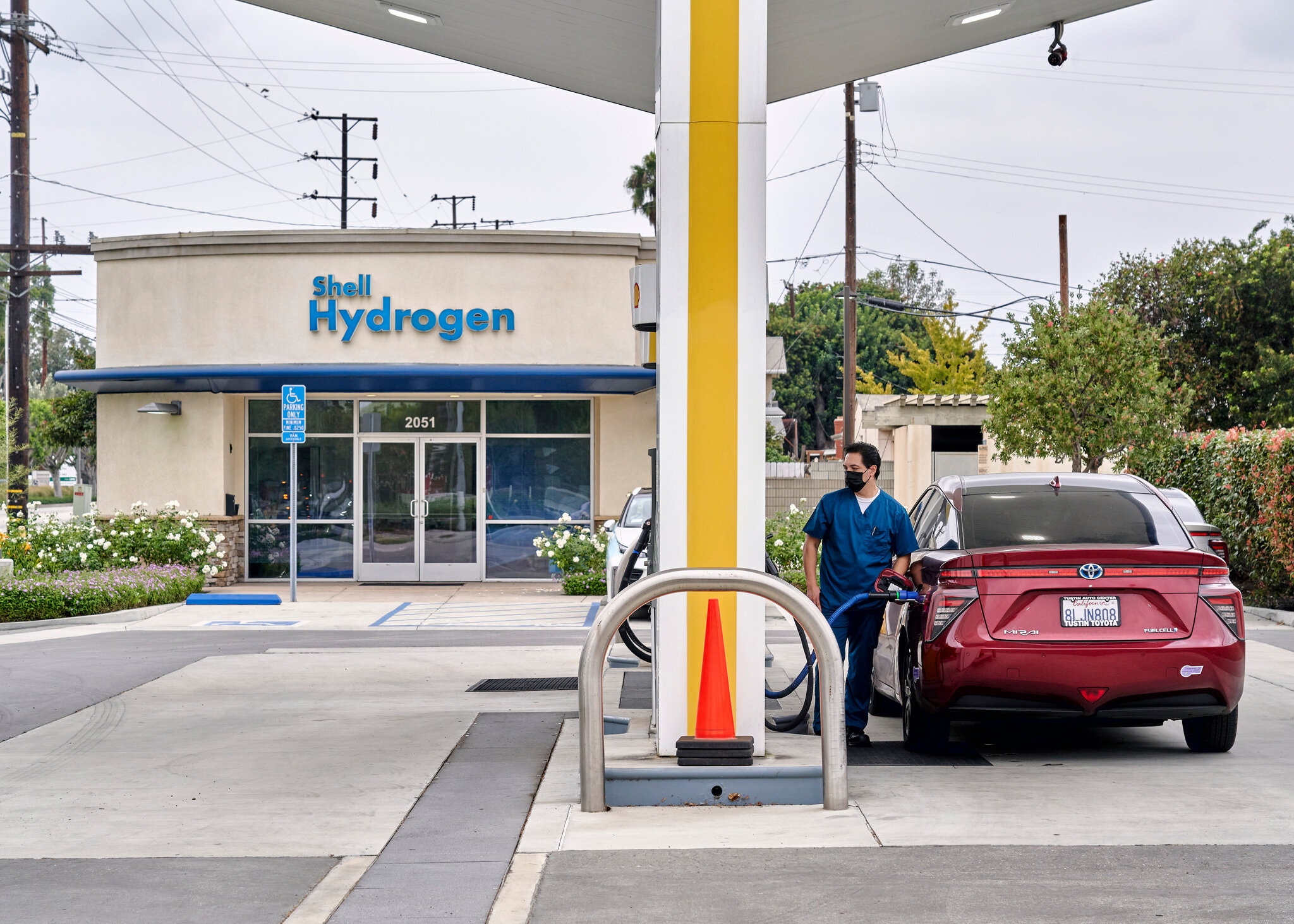 A Mirai costs nearly $60,000 before subsidies, which include a federal tax credit and a rebate from the State of California. Credit: Philip Cheung for The New York Times

European oil companies are also investing in renewables so they could, eventually, pair hydrogen production with solar and wind farms.

"The oil companies are very well positioned to play in this," said Joan Ogden, an energy researcher at the University of California, Davis. "They know how to make molecules at large scale better than anybody, they already use a lot of hydrogen in oil refining, and they are used to supplying transportation fuels."

Businesses are exploring other approaches, too.

Air Liquide, a French company, is building a $150 million plant outside Las Vegas that will turn biogas from decomposed organic waste into hydrogen, which it plans to sell in California. The plant will begin operations late next year. Air Liquide is building another plant on the Canadian side of Niagara Falls to supply the Northeast.

"We see hydrogen as an energy vector of the future," said Michael Graff, chairman and chief executive of American Air Liquide Holdings.

The hydrogen business may be in its infancy, but interest in it is robust and growing, said Michael Webber, a mechanical engineering professor at the University of Texas at Austin and chief science and technology officer at Engie, a French energy company.

"The customers for hydrogen are there," Mr. Webber said. "They're just waiting for the hydrogen to show up."


Ivan Penn reported from Irvine, and Clifford Krauss from Houston.