California Wastes Its Extra Solar, Wind Energy. Could Hydrogen be the Storage Key? 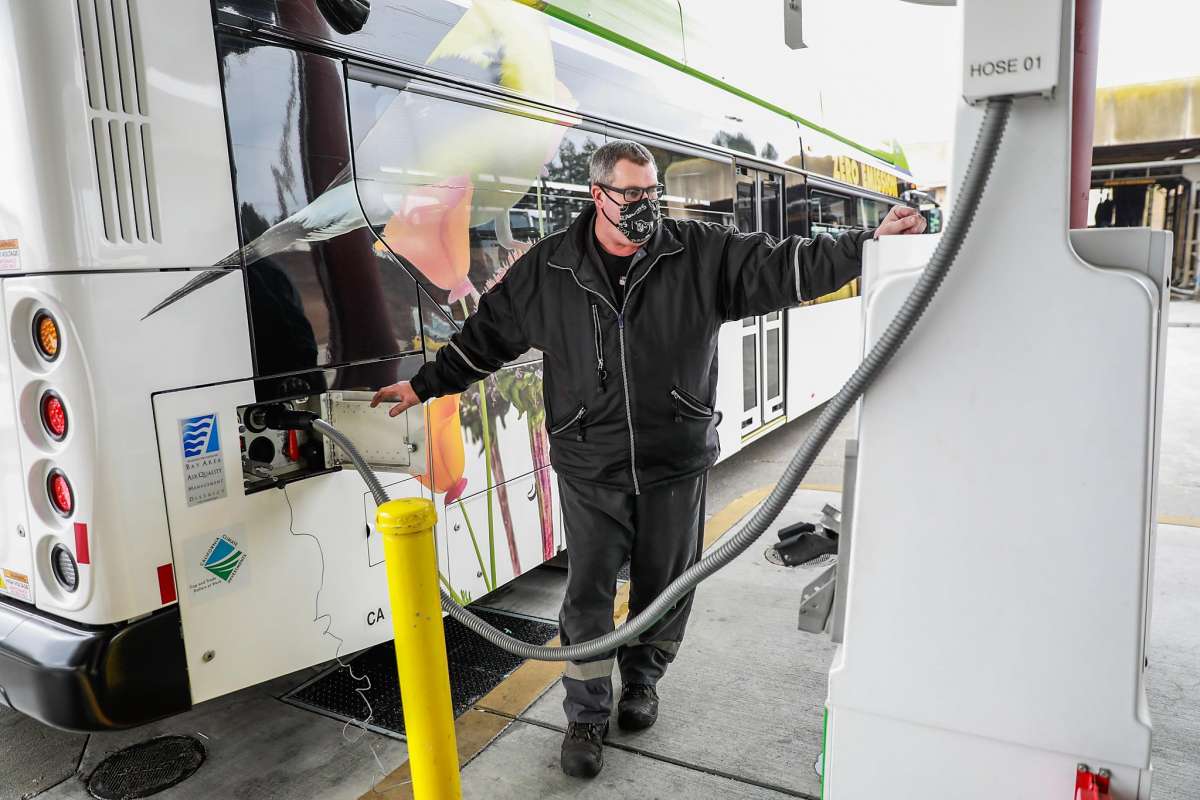 A worker fills an AC Transit bus with hydrogen fuel in Emeryville. Hydrogen gas can be stored and converted into electricity. Photos by Gabrielle Lurie / The Chronicle

SACRAMENTO — No amount of solar panels and wind turbines alone will be enough for California to reach its goal of a clean electrical grid unless the state can solve its energy storage problem.

The state already generates an abundance of energy from wind and solar farms, particularly during the sunny and blustery spring and early summer months. But it loses much of that energy because it has nowhere to store it, and unlike fossil fuels, the sun and wind don't generate power 24 hours a day. Utilities must kick on gas-fired power plants to keep up with California's energy demands during peak demand periods.

Some experts and legislators say the missing puzzle piece could be hydrogen, the most abundant element in the universe, which can be used as a zero-emission fuel for power plants, vehicles and machinery. Extra solar and wind energy can be used to create hydrogen fuel, which can then be stored and used to generate electricity to fill the gaps when the sun doesn't shine and wind doesn't blow.

State Sen. Nancy Skinner, D-Berkeley, is carrying a bill designed to jump-start the movement to green hydrogen by requiring state agencies to factor the fuel into their climate plans.

"Solar is great, but solar is only produced when the sun is shining," Skinner said. "In a perfect world, hydrogen is one of the absolute best fuels. Many of our other carbon-free energy sources have some limitations that hydrogen does not have."

Hydrogen gas can be used to fuel power plants using several methods. One option involves a fuel cell, which combines hydrogen and oxygen from the air to create an electrochemical reaction that produces electricity. Energy companies say hydrogen could also be used to power turbines that generate electricity, much like natural gas.

But hydrogen also has its downsides. Today, the vast majority of it is produced using fossil fuels, which creates greenhouse gas emissions that drive climate change. 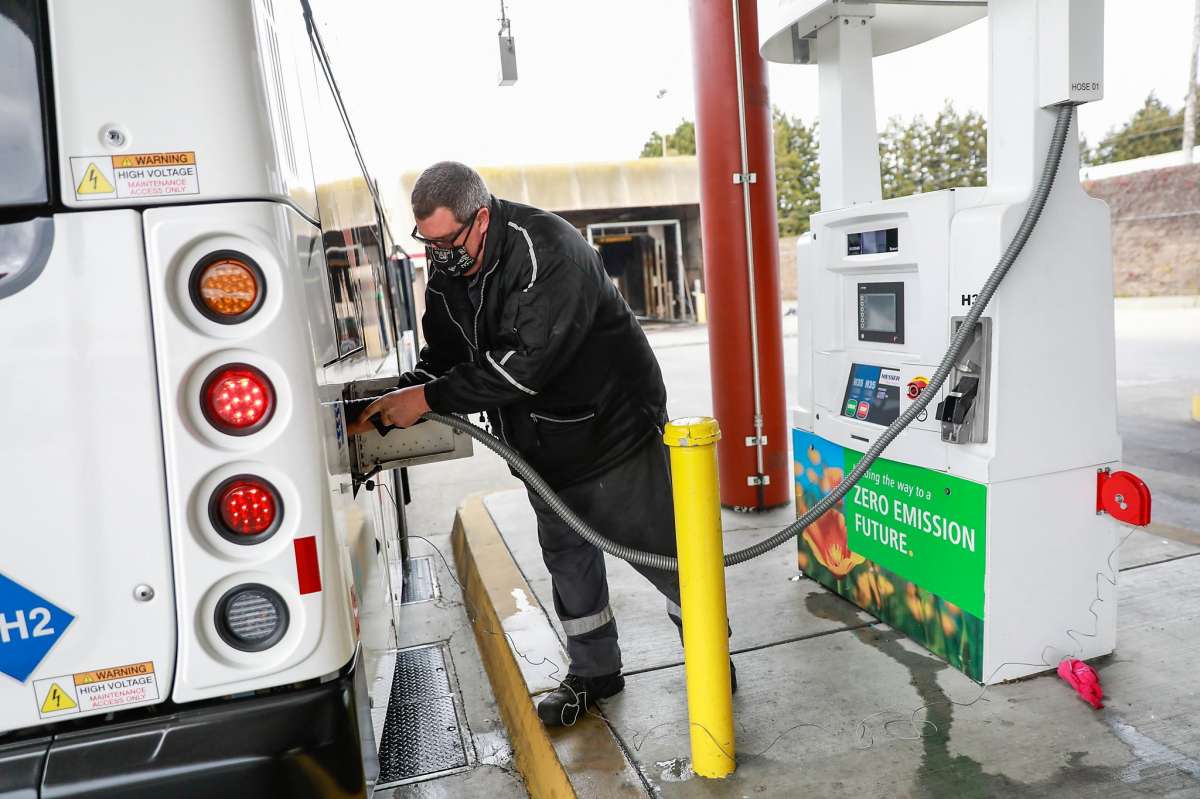 A maintenance worker prepares to fill up an AC Transit bus with hydrogen fuel in Emeryville. Gabrielle Lurie / The Chronicle

Skinner's bill, SB18, specifies that the state's climate and electrical grid plans include "green hydrogen," or hydrogen gas that is produced using electricity from renewable sources, such as solar and wind.

Renewable energy experts say her bill could nudge companies and utilities to invest in the technology. They warn that time is running out to meet the state's goal of switching to a carbon-free electrical grid by 2045.

In 2020, California lost about 1,587 gigawatt-hours in renewable energy because solar and wind farms generated more power than the grid needed at the time. The lost energy would be enough to power roughly 244,230 homes for a year, if it could be stored for when the state needs it.

When California has excess renewable energy

Last year, California lost more than 1,587 gigawatts of solar and wind power because it had nowhere to store the excess energy. Most of the energy was lost in the spring, when the state often must reduce output from renewable power sources to avoid overwhelming the grid. 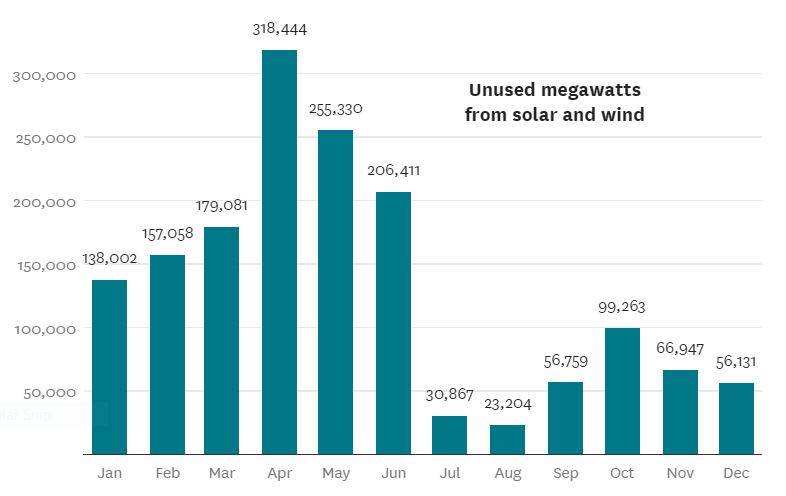 "It's a tragedy," said Janice Lin, founder of the Green Hydrogen Coalition, which advocates for increased use of the fuel. "Hydrogen enables us to literally bottle really large amounts of sunshine and wind, and you can use the electric grid and the gas grid to move that around."

California suffered through two days of blackouts last summer during a heat wave. The state had failed to plan properly for widespread high demand, particularly in the evenings as solar panels went offline. At the time, Gov. Gavin Newsom said the problem was a shortage of battery capacity to store solar and wind power.

Energy experts say more batteries are still needed, because they can most efficiently store and discharge energy over short periods. But batteries alone won't solve the seasonal storage problem.

Jack Brouwer, a professor of mechanical and aerospace engineering at UC Irvine and director of the National Fuel Cell Research Center, said hydrogen is more effective for longer storage because it doesn't lose energy over time and can be stored underground easily and cheaply.

"It's the only known zero-emissions ... solution for enabling this massive and long-duration storage on the grid," he said. "Eventually, we can't keep installing more and more batteries and make it through the year." 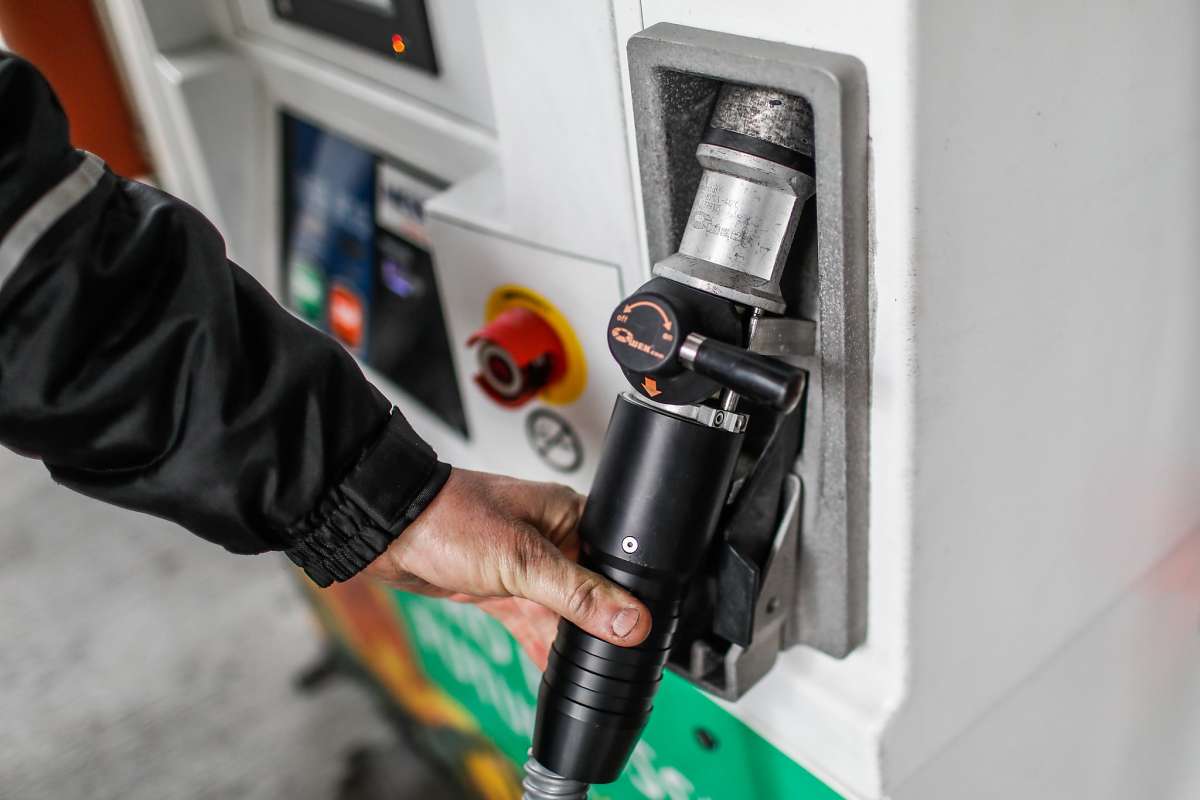 A bill by Sen. Nancy Skinner would have state agencies factor hydrogen fuel into climate plans. Gabrielle Lurie / The Chronicle

Hydrogen rarely exists on Earth in its pure form. That means hydrogen gas must be produced by splitting existing molecules of water or other substances.

Most hydrogen used worldwide today is derived from natural gas, coal or other fossil fuels. But there are several ways to produce hydrogen gas that are zero- or low-emission.

One is water electrolysis, the process of splitting water into hydrogen and oxygen using a device called an electrolyzer. It's carbon-free if wind and solar energy or another zero-emission source is used to power the electrolyzer — essentially, "storing" that green power by using it to create the gas.

The hydrogen gas can then be stored in large quantities, in underground caverns or pipelines, and turned back into electricity when the state needs it using retrofitted power plants.

"I would say it's almost the missing piece of the puzzle," said Jussi Heikkinen, director of growth and development at WÃ¤rtsilÃ¤ Energy, a Finnish technology company that has built battery storage systems in California. "We don't need to get rid of the power plants, but we need to get rid of fossil fuels."

Skinner's bill also emphasizes hydrogen's potential as a zero-emissions fuel for vehicles and machinery. Fewer than 10,000 hydrogen fuel-cell cars are on the road in the state today.

But experts say the most compelling areas for hydrogen vehicles may be large trucks, container ships and airplanes — areas where battery-electric engines are probably impractical because they are bulky and have a shorter range and lengthy charging time.

Hydrogen also has its skeptics who warn that the fuel would not be cost-effective today if produced solely from renewable energy sources.

"I think we have to invest with a full understanding that it might not (pencil out) and let the science go where it goes," said UC Berkeley energy economist Severin Borenstein.

Other critics say it's inefficient to convert electricity into hydrogen and hydrogen back into electricity. Tesla CEO Elon Musk has called hydrogen fuel-cell cars "staggeringly dumb" because they are less efficient than battery cars.

But hydrogen advocates say the rivalry is misguided because the technologies have different strengths, especially with energy storage. They say California ultimately needs a mix of hydrogen and batteries to reduce carbon emissions.

"I don't want the hierarchy," Skinner said. "We need to be smart and technology-neutral wherever we can be because we never know what breakthroughs will occur."