Irvine, Calif., Aug. 24, 2005 — The City of Irvine, along with the National Fuel Center Research Center (NFCRC) at the University of California, Irvine (UCI) and Toyota Motor Sales, USA are announcing today the City's participation in a pilot program designed to showcase the future of urban transportation. On the steps of City Hall, the City will take possession of a Toyota Fuel Cell Hybrid Vehicle (FCHV) via a sublease through the National Fuel Cell Research Center. Following a brief presentation made by Irvine Mayor Beth Krom, Toyota's Chief Environmental Officer, Dian Ogilvie, UCI Chancellor Michael Drake, and NFCRC Director Scott Samuelsen, Irvine Mayor Beth Krom and city council members will accept keys to the vehicle, making Irvine the first city in the nation to pilot a Toyota FCHV.

The City of Irvine's current and planned initiative is to lead the country as a model urban and environmentally friendly city. Irvine has long been recognized as a premier master-planned community supporting both business and residential needs, including multicultural lifestyles, family values and healthy living. The acceptance of Toyota's FCHV reinforces the City's pledge to address environmental concerns as well as the community's changing and future needs.

In support of Irvine's ongoing model urban city initiative, the City is one of only a few nationwide to adopt a "shared vehicle" public program. The ZEV·NET (Zero Emission Vehicle · Network Enabled Transportation) program, which is operated by the NFCRC and utilizes Toyota vehicles, combines mass transit with zero-emission, shared use vehicles to provide a cleaner alternative to single car commuting. In particular, the electric powered ZEV·NET vehicles address two major problems in Southern California - traffic congestion and poor air quality. Furthermore, Irvine is at the forefront of meeting federal and state clean air standards through a City fleet of vehicles, which use low-emission fuels. More than 10 percent of the City's vehicle fleet operate on Compressed Natural Gas with more running on other alternative fuels and hybrid technologies.

The National Fuel Cell Research Center was the first university fuel cell research center established in the United States. It has been in the forefront of the emerging hydrogen economy, working closely with Toyota on its fuel cell research by evaluating vehicle performance, reliability and usability.

The NFCRC is subleasing the FCHV to the city under a program begun in December 2002, at which time the NFCRC in partnership with Toyota introduced the nation's first highway-ready vehicle powered by a hybrid electric fuel-cell engine. Under its agreement with Toyota, the NFCRC will oversee the city's daily use of the vehicle and city officials' introduction to the hydrogen-refueling infrastructure. The NFCRC has existing subleases with two Irvine-based companies, Orthodyne Electronics and Horiba Instruments, whose [top of page] executives are the first in the nation to drive fuel cell vehicles on a daily basis.

As an industry leader in fuel cell research, Toyota started its proprietary work in FCHVs in 1992. The result of that effort is the experimental Toyota FCHV, which is a hydrogen-powered, fuel cell, zero-emission vehicle utilizing the same hybrid technology in Toyota's popular Prius gas-electric hybrid vehicle. Designed specifically to use hydrogen, which is available from an almost infinite supply of domestic natural resources, the vehicle converts the hydrogen fuel into electricity, while delivering power comparable to gasoline combustion engines. Environmentally, the impact is a water waste by-product resulting in no harmful environmental gases, such as carbon dioxide (CO2), and other dangerous air contaminants.

As Toyota's FCHV development continues, the Company has developed fuel cell "community" partnerships with U.S. government, business and higher education to resolve product, infrastructure and consumer acceptance challenges before mass production begins. The Company has also established two fuel cell friendly test communities - one in Southern California at the University of California, Irvine and the other in Northern California at the University of California, Davis. Within these test communities, Toyota has worked closely with the California Air Resources Board (CARB) and South Coast Air Quality Management District (SCAQMD), as well as corporations such as Stuart Energy and Air Products, to install a network of refueling stations. As a result, Toyota's Southern California FCHV fleet can easily navigate a five-county area, including Orange, Los Angeles and San Diego counties.

About the City of Irvine The City of Irvine was incorporated on December 28, 1971, under the general laws of the State of California. Irvine is one of the nation's largest planned urban communities and encompasses more than 55 square miles. The Irvine Civic Center is located at 1 Civic Center Plaza at Alton and Harvard in Irvine, Calif.

About the National Fuel Cell Research Center The NFCRC combines fundamental research with market-driven industry activities to advance the deployment of fuel cells, hydrogen and fuel-cell technology. It was established at the University of California, Irvine in 1997 in cooperation with the U.S. Department of Energy and the California Energy Commission. The center was formally dedicated on February 28, 1998.

About Toyota Motor Sales, U.S.A., Inc. Toyota Motor Sales, U.S.A. (TMS) Inc. is the sales, marketing, distribution and customer service arm of Toyota, Lexus and Scion in the United States, marketing products and services through a network of 1,408 Toyota and Lexus dealers in 49 states. Established October 31, 1957, TMS and its subsidiaries are also involved in logistics, motor sports, R&D and general aviation. Toyota is the third-largest vehicle manufacturer in the world and the fourth-largest automaker in the United States. 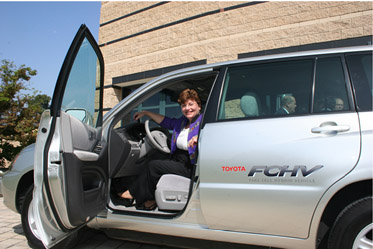 Media Note: For more background information regarding any of the participating parties’ activities related to alternative fuel cell research, development and/or use, please visit their respective Web sites, or contact one of the media contacts listed above.