Nearly 2 million people are expected to see the fuel cell exhibit, one of five main displays featured in the U.S. Pavilion's exhibit hall at EXPO 2005. The Expo, which opens March 25 and runs through Sept. 25, is located east of Nagoya in Japan's Aichi Prefecture. In selecting the theme "Nature's Wisdom," Japan cites the need for "modern science and technology to create a better world where humankind and nature can co-exist in harmony." More than 120 countries and numerous other exhibitors are participating in this event.

The theme for the U.S. Pavilion is "The Franklin Spirit" in celebration of the 300th anniversary of the birth of American statesman and inventor Benjamin Franklin. A virtual 3-dimensional image of Franklin will serve as the pavilion's official host and describe technologies of the past, present and future in the multimedia show. With an emphasis on innovation, the U.S. Pavilion's exhibit hall will feature, among other displays, a replica of the 1902 Wright Glider, a full-scale model of the Mars Rover space vehicle, the NFCRC's hydrogen fuel cell exhibit and the GM Autonomy fuel cell concept vehicle.

"We are very excited to be a part of the U.S. Pavilion," said NFCRC Director Scott Samuelsen. "This is a perfect venue for showcasing the fuel cell's potential for residential, commercial and industrial applications."

The NFCRC is sponsoring the exhibit in association with the Pacific Rim Consortium on Energy, Combustion and the Environment, a partnership of universities and companies that promote the advancement of efficient and environmentally friendly energy technologies in Japan, Korea, Taiwan, China, Singapore, Chile and the United States. PARCON was established in 1992 by the UCI energy program as an experiment to accelerate the advancement of environmentally preferred electric power generation in the region.

The fuel cell exhibit was made possible through private donations, primarily a major gift from one of the center's industry partners, Toyota Motor Sales, U.S.A., Inc., based in Torrance, Calif.

"The fuel cell and other 'clean' energy technologies have the potential to help us reduce our dependence on fossil fuels while sustaining economic growth, and the health of our environment and our communities," said Jim Press, Toyota Motor Sales' executive vice president and chief operating officer. "The NFCRC plays an instrumental role in advancing these technologies, and we are delighted to help the center in its efforts to increase public awareness of the fuel cell's potential."

The fuel cell exhibit features a 5-kilowatt GenSys™ stationary fuel cell manufactured by NFCRC industry member Plug Power of Latham, N.Y. Next to the fuel cell, the NFCRC has designed a demonstration resembling a water fountain to illustrate how heat produced by the fuel cell in the generation of electricity can be used to heat water.

Other elements of the display include an animated video describing fuel cell technology and its benefits, large-scale images of current and future technologies that employ fuel cells, and a model home designed to show how a photovoltaic panel in combination with a fuel cell could handle the power needs of a single-family home. 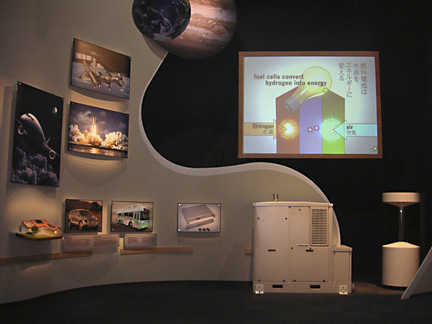 About the National Fuel Cell Research Center The NFCRC combines fundamental research with market-driven industry activities to advance the deployment of fuel cells, hydrogen and fuel cell technology. It was established at the University of California, Irvine in 1997 in cooperation with the U.S. Department of Energy and the California Energy Commission. The center was formally dedicated on Feb. 28, 1998.

About the U.S. Pavilion World Expo 2005 World Expo 2005 will be held in the Aichi Prefecture, Japan, from March 25 through Sept. 25, 2005. Business and political leaders from around the world will be among the estimated 15 million visitors to the Expo. Of the 122 country exhibits, the U.S. Pavilion is expected to be a major attraction that celebrates nature, progress and human achievement, with the Pavilion theme dedicated to "The Franklin Spirit." As the country's first diplomat and a Founding Father, Benjamin Franklin is the ideal personality to bring the story of U.S. innovation and achievement to life for those who visit the Expo.

On July 29, 2004, the U.S. Department of State signed a Memorandum of Agreement with Aichi-USA 2005 World Exposition, Inc. Under the terms of the Memorandum, Aichi USA 2005, Inc is raising all the funds necessary to create and manage the official U.S. Pavilion. Pavilion sponsors include leading American-based companies and organizations and U.S. states. More information on the U.S. Pavilion can be found at www.uspavilion.com.