Fuel cells are electrochemical systems that convert the chemical energy bound in a fuel directly to electrical power with high efficiency. With no internal moving parts, fuel cells operate similar to batteries. An important difference is that batteries store energy, while fuel cells produce electricity continuously as long as fuel and air are supplied. Fuel cells electrochemically combine a fuel (typically hydrogen) and an oxidant without combustion, thereby dispensing with the inefficiencies and pollution associated with traditional energy conversion engines. 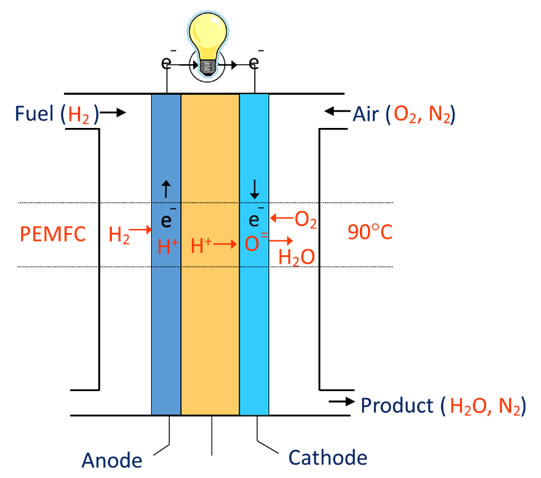 Similar to the electric battery, a fuel cell is composed of an anode and cathode separated by an electrolyte. Fuel (hydrogen) enters and is dissociated at the anode into protons (H+) and electrons (e–). While the electrolyte is receptive to transporting the protons to the cathode, electrons are rejected and required to find an alternative path. Engineers take advantage of this by providing a path for the electrons to travel through a load, represented in the illustration by a lightbulb. The electrons transfer energy to, and thereby support, the load. While "spent" when leaving the load, the electrons are sufficiently energetic to react with the oxygen entering the cathode and the protons exiting the electrolyte, and they close the electrochemical reaction by generating water. The water then mixes with the nitrogen from the air to comprise the fuel cell exhaust. The particular fuel cell described is a Proton Exchange Membrane Fuel Cell (PEMFC) that operates at modest temperatures (e.g., 90°C) and serves as the backbone of mobile fuel cell applications.