Fuel cell types are characterized by the electrolyte material. While there are dozens of types of fuel cells, there are five principle types in various stages of commercial availability, development, and demonstration:

While these fuel cell types are significantly different from each other in many respects, the key distinguishing features are the electrolyte material, the electrochemistry, and temperature of operation. 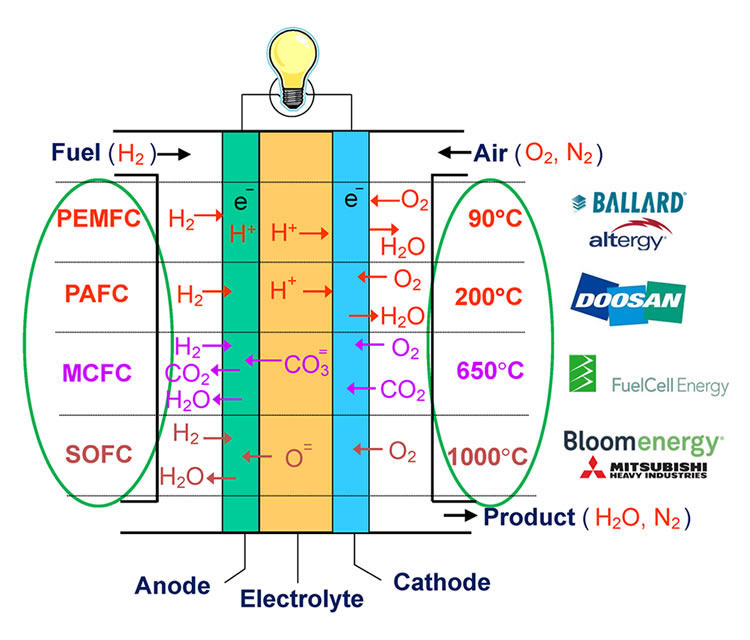 The following sections describe each of these fuel cell types.

Proton Exchange Membrane Fuel Cell
The proton exchange membrane fuel cell (PEMFC) is also known as the solid polymer or polymer electrolyte fuel cell. A PEMFC contains an electrolyte that is a layer of solid polymer (usually a sulfonic acid polymer, whose commercial name is NafionTM) that allows protons to be transmitted from one face to the other. PEMFCs require hydrogen and oxygen as inputs, though the oxidant may also be ambient air, and these gases must be humidified. PEMFCs operate at a temperature much lower than other fuel cells, because of the limitations imposed by the thermal properties of the membrane itself. The operating temperatures are around 90°C. The PEMFC can be contaminated by CO, reducing the performance and damaging catalytic materials within the cell. A PEMFC requires cooling and management of the exhaust water to function properly.

Phosphoric Acid Fuel Cell
Phosphoric Acid Fuel Cell (PAFC) technology is the most mature of the types in use today, first commercialized in 1990. PAFCs use a concentrated 100% phosphoric acid (H3PO4) electrolyte retained on a silicon carbide matrix and operate at temperatures between 150 and 220°C. Concentrated H3PO4 is a relatively stable acid, which allows operation at these temperatures. At lower temperatures, problems with CO poisoning of the anode electro-catalyst (usually platinum) and poor ionic conduction in the electrolyte become problems. The electrodes typically consist of TeflonTM-bonded platinum and carbon (PTFE-bonded Pt/C).

Turnkey 200-kilowatt plants were the first commercial units to be installed at more than 200 sites in the United States, Europe, and Asia (principally Japan). Today, the commercial unit is deployed at 400kW. Operating at about 200°C, the PAFC plant can produce heat for domestic hot water and space heating, and its electrical efficiency is 36-40 percent.

Molten Carbonate
Full-scale molten carbonate fuel cell (MCFC) plant, first commercialized in 2003, are operating in the United States, Korea, and Europe. The electrolyte in an MCFC is an alkali carbonate (sodium, potassium, or lithium salts such as Na2CO3, K2CO2, or Li2CO3) or a combination of alkali carbonates that are retained in a ceramic matrix of lithium aluminum oxide (LiAlO2). An MCFC operates at 600 to 700°C where the alkali carbonates form a highly conductive molten salt with carbonate ions (CO3=) providing ionic conduction through the electrolyte matrix. Relatively inexpensive nickel (Ni) and nickel oxide (NiO) are adequate to promote reaction on the anode and cathode respectively at the high operating temperatures of an MCFC.

MCFCs offer greater fuel flexibility and higher fuel-to-electricity efficiencies, approaching 60 percent, than lower temperature fuel cells. The higher operating temperatures of MCFCs make them candidates for combined-cycle applications, in which the exhaust heat is used to generate additional electricity. When the waste heat is used for co-generation, total thermal efficiencies can exceed 85 percent.

Solid Oxide
Solid Oxide Fuel Cells (SOFCs) were first commercialized in 2009, and are deployed in the United States, Korea, and Europe from hundreds of kilowatts to tens of megawatts. SOFCs utilize a non-porous metal oxide (usually yttria-stabilized zirconia, Y2O3-stabilized ZrO2) electrolyte material. SOFCs operate between 650 and 1000°C, where ionic conduction is accomplished by oxygen ions (O=). Typically the anode of an SOFC is cobalt or nickel zirconia (Co-ZrO2 or Ni-ZrO2) and the cathode is strontium-doped lanthanum manganite (Sr-doped LaMnO3) (Singhal, 1997; Minh, 1993).

SOFCs offer the stability and reliability of all-solid-state ceramic construction. High-temperature operation, up to 1,000°C, allows more flexibility in the choice of fuels and can produce very good performance in combined-cycle applications. SOFCs exceed 60 percent electrical efficiency in the simple cycle system, and 85 percent total thermal efficiency in co-generation applications.